PROUDLY LOCAL Despite the drop in demand caused by the coronavirus pandemic, Benguet farmers continue to produce salad vegetables, like carrots, beans, lettuce, cabbage and cauliflower, in 2020 and this year. They are now facing stiff competition from cheap smuggled carrots. —EV ESPIRITU

LA TRINIDAD, Benguet —Highland producers of salad vegetables have secured fresh evidence that smuggled carrots have flooded the country’s markets to the detriment of Benguet farmers.

Benguet farmers alerted the Department of Agriculture (DA) in August about imported crops being sold at the Divisoria public market in Manila but the agency said the Bureau of Plant Industry had not issued any import permits for vegetables, said Augusta Balanoy of Highland Vegetable Multipurpose Cooperative.

However, a bigger volume of foreign carrots was spotted in key markets in the country this month, she said on Saturday.

Balanoy said their investigation showed that small warehouses near Divisoria had allegedly been releasing imported vegetables to the Metro Manila market whenever Benguet vegetable prices rise.

Vegetable traders in Cebu have also advised the Benguet vegetable industry that four container vans filled with carrots from China have been distributed in their markets every week, she said.

According to Balanoy, they had secured samples of the imported carrots that were shipped in boxes with markings that indicated that the produce came from China.

She said they would now be writing to the Bureau of Customs to address vegetable smuggling.

Smuggled vegetables have made life more difficult for Benguet farmers still staggering from the impact of the coronavirus pandemic, she said.

Lorna Menzi, who facilitates the shipment of produce at La Trinidad Vegetable Trading Post, said orders had dropped drastically due to the proliferation of imported carrots in Metro Manila, Cebu, and Cagayan de Oro City.

“Our buyers reduced their orders because of the pandemic. With the entry of the cheap imported carrots, orders dropped even more,” she added. 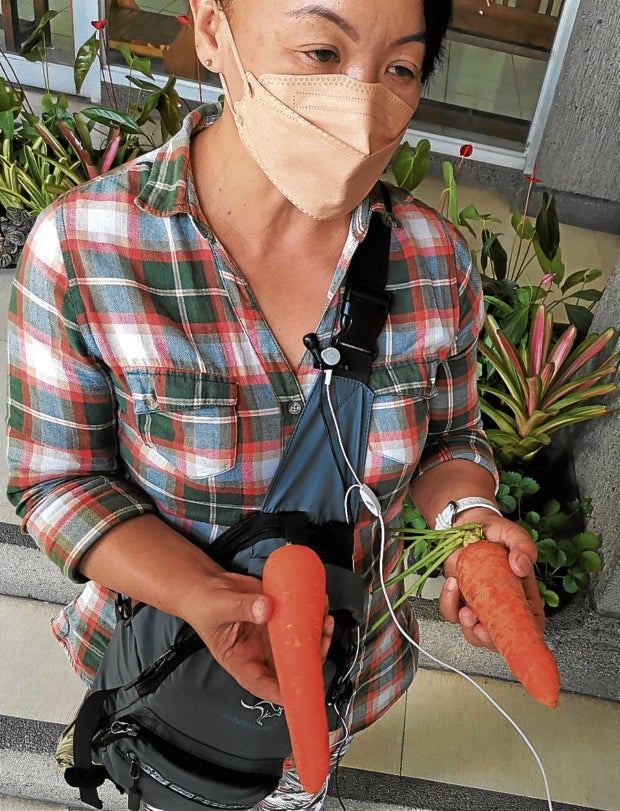 From 100 sacks of carrots a day, each containing 80 to 90 kilos, traders have sold no more than 30 sacks a day recently, Menzi said.

Benguet farmers have been battling the economic fallout from trade liberalization since 2007, as foreign commodities are priced lower than homegrown vegetables, Balanoy said.

“Dealers of imported carrots can drop their prices at half the selling price of local produce. How can we compete with that especially at this time of a pandemic?” Menzi said.

The wholesale price for Benguet carrots is currently P50 a kilo while imported carrots sell at P25 a kilo.

“Importation really hurts our local farmers, not just of carrots and vegetables, but also rice. Our farmers can produce enough [for the country’s needs], but why do imported produce continue to flood our markets,” said Rudy Bulawan, president of Benguet Truckers and Traders Association.

“For years now, when our complaints about imported vegetables get public attention, [smuggled crops] disappear from the markets, but return when public attention wanes,” he said.

The influx of smuggled vegetables is currently being investigated by the DA in Manila, said Cameron Odsey, DA director for the Cordillera. INQ

Don’t miss out on the latest news and information.