In August 2021, Shanghai released several policy documents outlining its vision for developing the city into an international financial center. The documents include city-wide strategies for further liberalization and opening up of Shanghai’s financial industry during the 14th five-year plan period (2021 to 2025). At around the same time, the Lingang New Area of the Shanghai Free Trade Zone released its own set of policy measures to incentivize the growth of the local financial industry.

On August 24, 2021, the Shanghai Municipal Government released the 14th Five-Year Plan for Developing an International Financial Center (‘the 14th FYP’). The 14th FYP contains 44 policy measures aimed at turning Shanghai into an international finance center. It outlines the city’s ambitions for leveling up the influence of Shanghai’s capital markets on the global stage with measures such as the further liberalization of the renminbi (RMB) and the opening up of the industry to outside investors.

The release of this document came the day after the release of the Measures to Support the Innovative Development of the Financial Industry in the Lingang New Area of the China (Shanghai) Pilot Free Trade Zone (the ‘Lingang measures’). This document outlines specific incentives for foreign and domestic financial institutes to set up in the Lingang New Area, a key development area of the Shanghai Free Trade Zone (FTZ) in the city’s Pudong district.

In this article, we look at the development goals outlined in the 14th FYP that may impact foreign investors, and provide an overview of the incentive policies for financial institutions to set up in the Lingang New Area.

Shanghai is already home to a highly developed financial sector. In 2020, Shanghai’s financial industry added RMB 716.6 billion (US$111.4 billion) in value, accounting for 18.52 percent of the city’s entire GDP that year (RMB 3.87 trillion (US$601.5 billion)). The industry is now seen as a key driver of economic growth in the region, in particular the strategically important Yangtze River Delta (YRD) region.

The goals outlined in the 14th FYP aim to grow the scale of Shanghai’s financial industry, further liberalize the sector, open it up to foreign investment, and better utilize financial tools to fuel high-tech and innovative industries.

The measures outline specific targets for Shanghai’s financial industry in the 14th FYP period (2021 to 2025).

In addition to the above indicators, the document outlined the city’s aim to drive a higher level of recognition and influence of the ‘Shanghai price index’ for commodities in the international market and to attract or cultivate about 50 leading fintech companies by 2025.

The 14th FYP outlines eight key ‘tasks’ for reaching these goals. The task of highest interest to foreign investors is the measures to further liberalize Shanghai’s financial industry and open the industry up to overseas investors, as well as creating the infrastructure to better facilitate international trade.

One such measure is to further drive the internationalization of the RMB by turning Shanghai into an RMB-denominated asset allocation center. Plans to strengthen have been in the works for some time, with the city announcing goals for developing the asset allocation industry in guidelines for the development of the Pudong New Area released at the beginning of July.

Specifically, the measures call for:

What is Qualified Foreign Limited Partnership?

Qualified Foreign Limited Partnership is a system under which certain qualified foreign asset management institutions can establish renminbi funds within ‘pilot areas’ on the Chinese mainland. There are currently 10 QFLP pilot areas in China and include the cities of Shanghai, Beijing, Tianjin, Shenzhen, and Qingdao.

The new measures double down on the expansion of the QFLP program, stating that Shanghai will:

However, the 14th FYP does not provide details on how the city plans to achieve these goals.

It bears mentioning that the 14th FYP does not offer specific measures or solutions to achieve these ambitious goals. The document, however, serves as a useful gauge for the areas the government seeks to develop or reform and acts as a guideline for formulating and implementing incentives and other policy tools in the future.

To this end, the municipal government has already released specific policies for developing Shanghai’s financial industry in various districts of the city, and we expect to see more such policy documents to be released over the next five years.

The Lingang New Area is a section of the Shanghai Pilot FTZ in the eastern Pudong New Area of Shanghai.

Established in 2019, the Lingang New Area has become a testbed for incentive policies and tax benefits aimed at cultivating strategic high-tech and innovative industries.

Now, the local government is aiming to boost its financial capabilities, which it sees as an indispensable player in the cultivation of trade and high-tech industries in the area. The 14th FYP specifically mentioned the Lingang New Area as a region in which to develop the financial industries, proposing to:

Incentive policies in the Lingang measures

The Lingang measures specify the types of financial institutions that are eligible for the incentive policies. 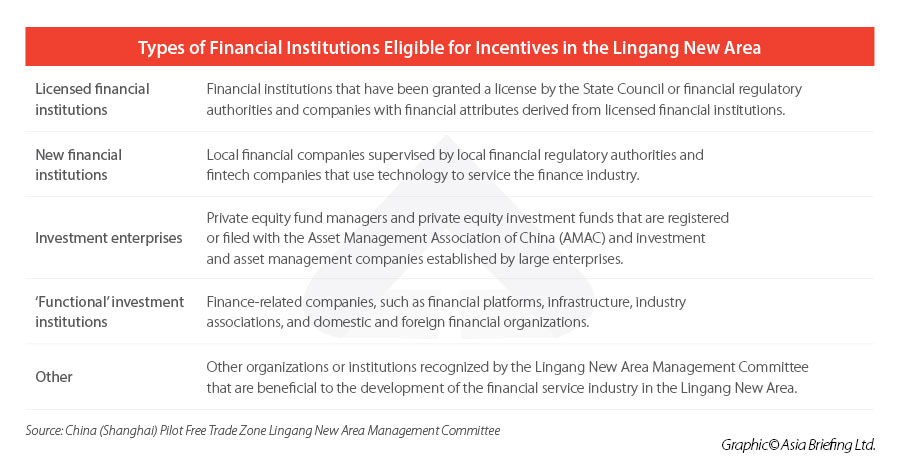 The incentives also clarified that rewards are given only to companies that have been established in, relocated to, or obtained business licenses in the Lingang New Area from January 1, 2021 onward.

Companies that are granted any of the rewards for new financial institutes in the Lingang New Area must promise in writing not to leave the area or reduce the amount of registered capital for 10 years, starting from the year they receive the reward. Companies that violate this promise will be required to repay the monetary rewards or support they have received.

Incentive policies for setting up in Lingang

New wholly-owned financial institutions or holding companies that meet the conditions outlined in the table above are also eligible for certain rewards.

Certain new asset management institutions are eligible for rewards amounting to an unspecified proportion of their scale. This reward is given on a yearly basis for four years starting from the year following their establishment in the Lingang New Area, with the total amount capped at RMB 40 million (US$6.2 million).

Fintech companies may also be eligible for additional rewards if they make large-scale investments, introduce a large number of new talent, and are an influential driving force in the area, provided they meet the requirements for the ‘new financial institution’ designation.

Senior management in a legal financial entity set up in the Lingang New Area may be eligible for a one-time talent introduction reward of RMB 200,000 (US$31,084) per person.

New high-end overseas financial talents who are in short supply and meet certain conditions will be subsidized for the difference in personal income tax between their home country and China.

Newly introduced employees of various financial enterprises and functional institutions may also be eligible for other preferential policies and supportive services, such as support with resettlement, housing purchase and rental, medical insurance, and children’s education.

Supporting the creation of industry clusters

The Lingang measures outline a number of incentive policies geared toward encouraging the aggregation of financial businesses in the Lingang New Area. The policies include supporting financial enterprises to lease their own office buildings in Lingang’s core area and subsidies for the establishment of headquarters.

Specifically, subsidies for up to 50 percent of the annual rent over a period of three years will be provided for key projects renting office space in financial clusters, based on the actual leased area and capped at RMB 10 million (US$1.6 million).

Supporting innovation in the finance industry

In an effort to encourage innovation, the local government offers a series of rewards for accomplishments in the financial industry. The rewards include:

A blueprint for the development of China’s financial industry

Shanghai has been the financial powerhouse of China ever since the country’s opening up. Over the past three decades, the industry has developed into one of the most mature capital markets in the world and a key driver of development in the region and beyond.

Today, the city also acts as a testbed for pilot schemes in the financial industry and is on the frontline of China’s campaign to further open its capital markets to outside investment and internationalize the RMB. In this field, it may also represent a blueprint for further opening up in other Chinese cities as successful cases in Shanghai are replicated elsewhere.

Looking ahead, it is clear the city will not be content with being the financial center of China – it is seeking to increase its influence worldwide. The measures outlined in the 14th FYP and the Lingang measures represent a continuation of Shanghai’s ambitions to become a leading financial hub on the global stage.

China Briefing is written and produced by Dezan Shira & Associates. The practice assists foreign investors into China and has done so since 1992 through offices in Beijing, Tianjin, Dalian, Qingdao, Shanghai, Hangzhou, Ningbo, Suzhou, Guangzhou, Dongguan, Zhongshan, Shenzhen, and Hong Kong. Please contact the firm for assistance in China at [email protected]